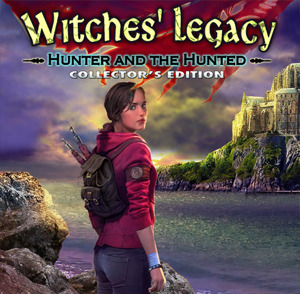 The series follows Carrie (player) and her adopted daughter Lynn as they battle Elisabeth, a dark witch who seeks to steal Lynn's abilities for herself. Later, they are joined by Lynn's husband Edward, a witch hunter won over by the way that Lynn uses her abilities for good.

The stories are as follows:

The Charleston Curse (2012): Carrie receives a mysterious message from a woman named Elisabeth who claims to be the guardian of Carrie's last surviving relative, a girl named Lynn.

The Lair of the Witch Queen (2013): A teenaged Lynn uses her powers in a Roaring Rampage of Revenge against Elisabeth with potentially disastrous results.

Hunter and the Hunted (2014): A number of years have passed and Lynn and Carrie appear to be living happily in Lynn's childhood home. Lynn is even dating Edward—a man with a Dark and Troubled Past of his own.

The Ties that Bind (2014): A trip to the orphanage where Edward grew up reveals secrets about his past (and present) that even he didn't know.

Slumbering Darkness (2015): Life seems to have settled down for Carrie, Lynn and Edward but dark forces are arising and a family trip to the funfair doesn't go as planned.

The Dark Throne (2015): Morgana's power takes over Lynn in an attempt to turn her into the new Witch Queen.

Awakening Darkness: Cassandra curses Jack and his mother and possesses his sister. During the rescue attempt he's joined by Lynn's daughter Anabel and a girl named Bertha, who can turn into a ferret.

Dark Days to Come: Anabel is kidnapped by Marcus and Mara, who try to take over the world.

The City That Isn't There: Jack's mother disappears while researching family history in a mysterious town called Sallenvile.

Covered By the Night: Anabel and most of the University of Witchcraft are put into an enchanted sleep by escaped sorcerer Felix.

Rise of the Ancient: Jack and Anabel, now married, awaken the Ancient One as a last-ditch effort against the demon Ezar and his forces.