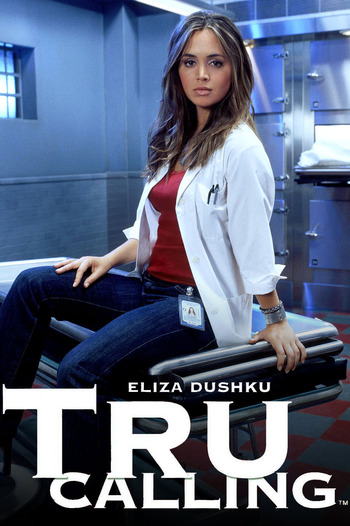 Tru Calling is an American Spec-Fi series that aired on the Fox network from 2003-05. Despite grabbing a large cult following, the show was sadly cancelled.

Tru Davies (Eliza Dushku) is a hot young morgue worker who one day discovers she can hear the voices of the recently deceased. And they pretty much only say one (surprisingly cryptic) thing: "Help Me". This triggers a time reset to before they died, and Tru uses everything she knows about the deceased and her own skills in an attempt to save them. This also affords her the opportunity to fix mistakes in her and her brother's lives and to make sure she never progresses with her Love Interest by resetting any positive development.

The plot - already surprisingly unpredictable at times - livened up late in the series with the addition of characters working against Tru's efforts, which eventually brought into question whether or not Tru's alterations to the timeline were really all that ethical. Many tantalizing twists and plot points were promised, but its untimely cancellation means we will never Tru-ly know...