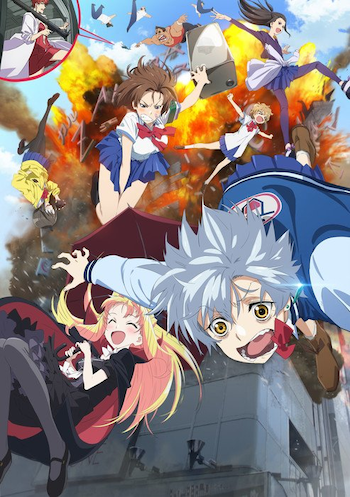 Mitsugu Banba is a high school girl with an unusual fixation on donating her blood. Her "interests" lead her to frequent the local blood bank, and it's there where she meets Mai, a beautiful, fragile-looking girl who looks like she's about to faint at any second. But to Mitsugu's shock, the delicate waif suddenly begins to tear up the place! After Mai loses consciousness, Mitsugu pulls her out of the blood bank, which then explodes, and it's then that she learns that Mai wasn't there to donate blood... she was there to drink it.

Described as a "girl-meets-girl" vampire slapstick comedy, Vlad Love is the first anime series to be helmed by Mamoru Oshii in over thirty years, and is also his first return to comedy since Urusei Yatsura. Junji Nishimura serves as director, and the series is produced by Drive.

The 12-Episode Anime was originally scheduled to premiere in October 2020, but it was delayed due to the COVID-19 pandemic. The first half of the series was released on February 14, 2021, while the second half was released on March 14, 2021.