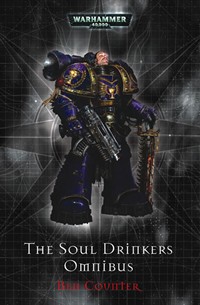 Purity through hate. Dignity through rage. Let the fire within light the fires without.
Advertisement:

The Soul Drinkers are a Warhammer 40,000 chapter of renegade Space Marines, a successor chapter to the Imperial Fists.

They are the subject of a series by novels by Ben Counter: Soul Drinker, The Bleeding Chalice, Crimson Tears, Chapter War, Hellforged, and Phalanx, which have been collected into two omnibus editions, Redemption and Annihilation. In the first, they are nearly seduced into the service of Chaos, but reject it. Nevertheless, afterwards, they do not return to the service of the Imperium but forge their own path.

Please resist the urge to put examples on this page or link to this page on tropes unless you are citing from 40K novels in which the Soul Drinkers feature. Examples which are specific to rulebooks or other in-universe fluff should go on either the 40K page or in the Space Marines character page.

The novels make use of these tropes: