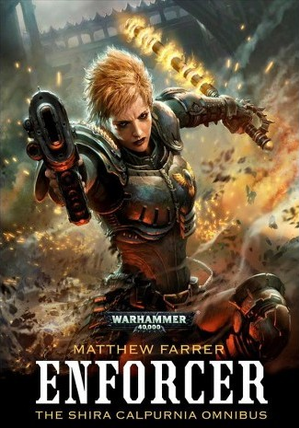 Shira Calpurnia is the central character in a trilogy of Warhammer 40,000 novels by Matthew Farrer. An Arbitor Senioris of the Adeptus Arbites, the trilogy follows her as she takes up the office on the Imperial Hive World of Hydraphur and is almost immediately embroiled in troubles both criminal and political. The first novel, Crossfire, sees her working to solve the mystery behind apparent attempts to disrupt one of Hydraphur's most important religious holidays. The second, Legacy, involves the arbitration of the transfer of a Rogue Trader charter which becomes far more complicated than originally planned. The third, Blind, sees Calpurnia attempting to solve the murder of a high-ranking Astropath.

The novels were collected in an omnibus edition titled Enforcer.

These novels provide examples of the following: