Literature / The Sorcerer of the Wildeeps 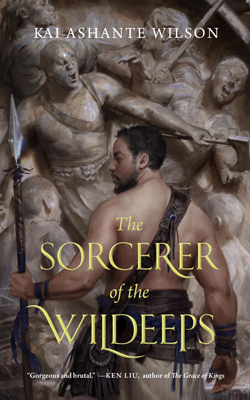 Ashé's children wish us well,
but never trust them, born of Hell.
TsimTsoa's by far the best,
for weal and woe, than all the rest!
— from "Tower Song," chanted for skip-stone games in Great Olorum
Advertisement:

The Sorcerer of the Wildeeps, published in 2015, is a novella by American author Kai Ashante Wilson. It is set in a fantasy equivalent of Ancient Africa, with a smattering of Science Fantasy.

The story is told from the point of view of demigod Demane — known as Sorcerer — who in his effort to blend in among humans is second-in-command of a mercenary band employed by a merchant named Suresh l'Merqerim. Suresh wants them to accompany him as far south as the famed city of Olorum and promises them a hefty pay upon arrival at its gates. However, to reach Olorum they would have to cross a jungle known as the Wildeeps, through which only one safe road exists and to leave that road means certain death. Worse, Demane suspects that a terrible beast from his homeland, the jook-toothed tiger, has made itself at home in the Wildeeps and it has no obligation to respect the road's boundaries.

Of an even bigger concern to Demane, however, is the band's enigmatic Captain Isa — and Demane's secret lover. In a company of mercenaries such as theirs is one, being found out would not go over well, especially since Isa — generally known as just Captain — also has to hide his own heavenly descent; and he has a far more difficult time doing so, for his voice is so beautiful he cannot speak but sings, and his hair takes nourishment from sunlight.

Demane has to navigate his frustration with being unable to acknowledge his relationship with Captain, keeping the brothers in check and striking a balance between his human and divine heritage.

The novella A Taste of Honey by the same author is set in the same world as The Sorcerer of the Wildeeps.

The Sorcerer of the Wildeeps provides examples of the following tropes: