This page is for characters who appear in 3Below.

For other Tales of Arcadia characters go here.

Royal Family, The House of Tarron 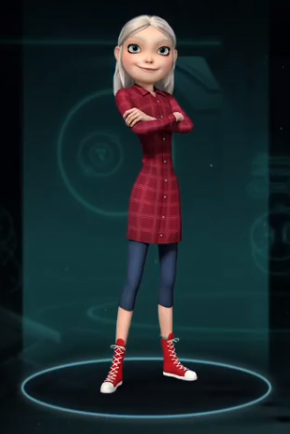 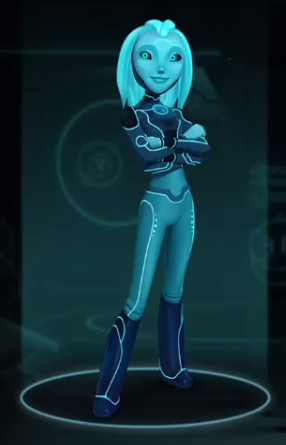 A teenage alien princess disguised as a human girl who appears in Season 3 of Trollhunters and is one of the main protagonists along with her brother in 3Below. 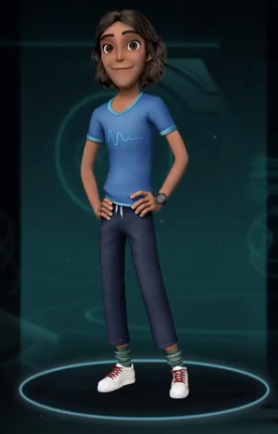 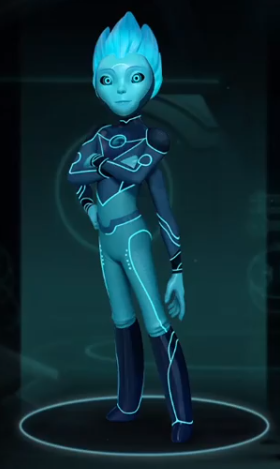 A teenage alien prince disguised as a human boy who appears in Season 3 of Trollhunters and is one of the main protagonists along with his sister in 3Below.

The king and queen of Akiridion-5 and the parents of Aja and Krel Tarron. Following an attack on their home by General Val Morando, they are both injured and spend the majority of the series in regeneration pods to heal while their children work to protect them. 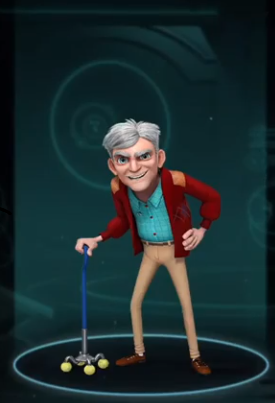 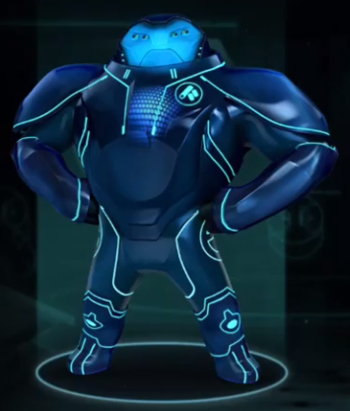 The zealous and battle-hungry commander of Akiridion-5's military force the Taylon Phalanx and Aja and Krell's bodyguard. On Earth, he is disguised as an elderly human man who acts as a protagonist along with the royal siblings in 3Below. 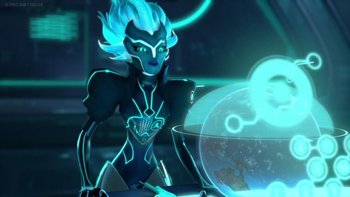 Commander Vex's second in command. She stayed behind in order to give the royals a chance to escape. 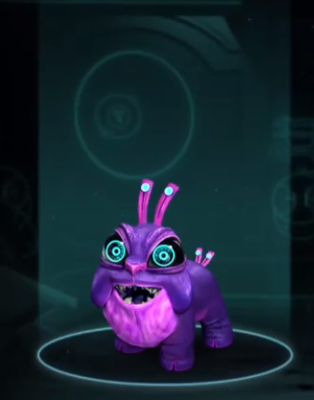 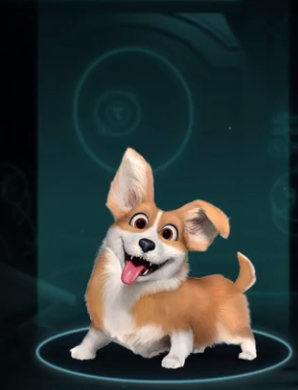 Princess Aja's alien dog. On Earth, he is disguised as a Corgi. 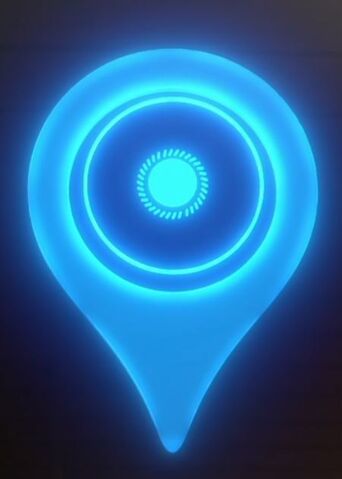 The A.I. for the most high tech ship in the galaxy.

A member of the rebellion. Her daughter was saved by Aja during Morando's attack.

A seemingly non-Akiridion alien who is the royal adviser of House Tarron. Following General Morando's hostile takeover, he is coerced into helping Morando in his tyrannical endeavors. 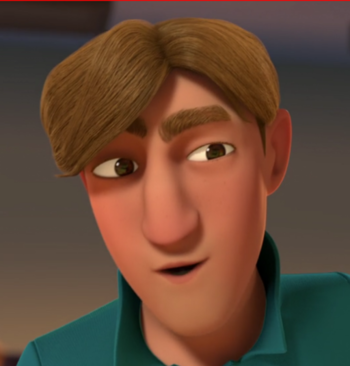 The resident bully, suspicious of the weird things Jim does. 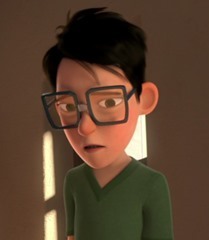 One of Jim's classmates who is out to prove the existence of Trolls. 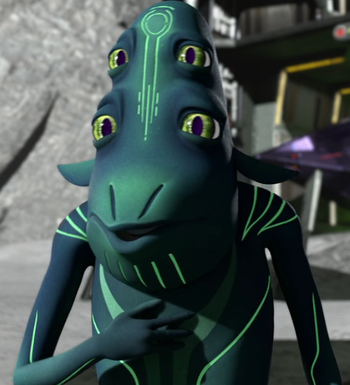 A helpful alien the three meet who has been living on Earth for 30+ years. He hails from the planet Durio, known for being the smelliest planet in the universe, and occasionally helps the heirs when they have an Earth problem. 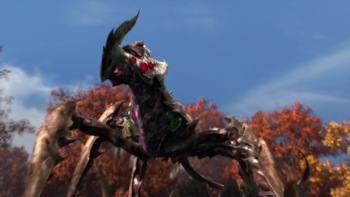 A large, insect-like alien imprisoned at Area 49-B alongside Stuart until he (Stuart) escaped. 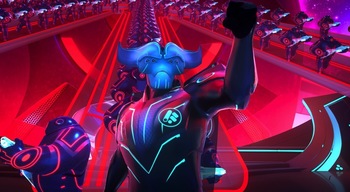 No place for the royals can hide as beyond my reach.
Voiced by: Alon Aboutboul

An evil, tyrannical dictator who takes over Akiridion-5 and serves as the main antagonist of 3Below. 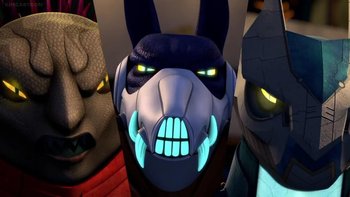 A trio of ruthless bounty hunters who will stop at nothing to claim their prize, not even killing innocent civilians. 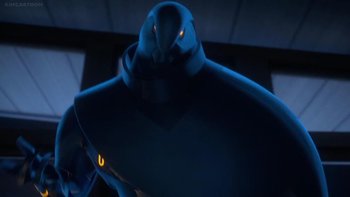 A mysterious birdlike bounty hunter who infiltrates Arcadia in order to hunt down the royals. 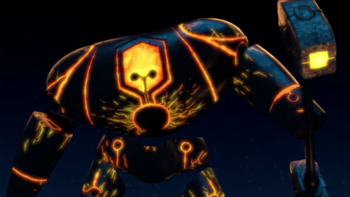 A large, violent, trash-talking bounty hunter who is a member of a race of mechanized, magma-fueled beings called Cindorites from the volcanic planet Cindor. He comes to Earth in hopes of collecting the bounty placed on the Tarron Family but faces resistance from Aja, Krel, Zadra, and their human allies. 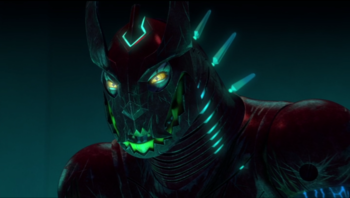 An electrothermal lifeform from the planet Voltar that hunts for the royals partly out of a desire to win the bounty on their heads but also out of revenge because their mother and father would not come to his planet's aid when it was being destroyed by a civil war. 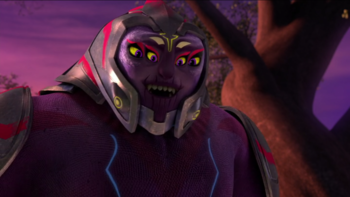 A hulking bounty huntress from the planet Gorbon who is also Stuart's ex-girlfriend.

Foo-Foo
Voiced by: Tom Kenny (the Destroyer) and Matthew Waterson (all other Foo Foos) 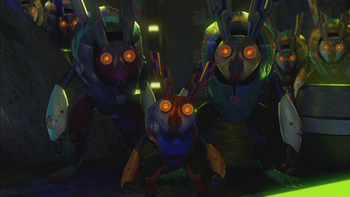 A species of small, rabbit-like, mechanical beings. They reproduce quickly and are all bounty hunters working together. 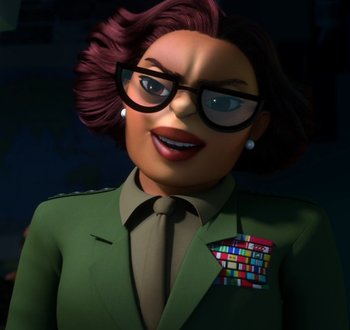 The colonel in charge of observing all the alien life of Area 49-B. 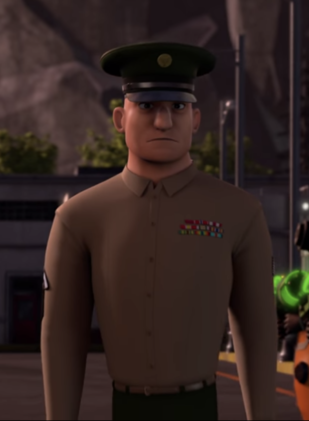 Gaylen and Seklos
Two ancient god-like beings. Gaylen was the creator of Akiridion-5, but as he grew more powerful he also grew fearsome, and Seklos used her own core to stop him.