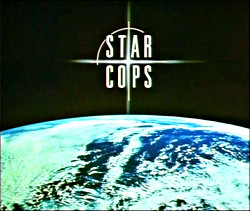 Spacemen are ten-a-penny. What they need out there is a good copper.
Advertisement:

Star Cops was a British science fiction television series created by Chris Boucher that was first broadcast on BBC2 in 1987. Set in the year 2027, the world of Star Cops includes five permanently manned space stations orbiting the Earth, as well as bases on the Moon and Mars, and approximately three thousand people live and work in space. The setting was influenced by the potential for greater access to space promised by the then new Space Shuttle programme, and by concerns about the militarisation of space through the US government's Strategic Defense Initiative (known as "Star Wars"), both of which were underway in the early 1980s. Space travel and life in space are portrayed in a hard science-fiction style, with fairly realistic depictions of weightlessness and low-gravity environments, lengthy space journeys of months or years, and hazards such as spacesuit failures and radiation exposure.

Law enforcement in the developing stations and colonies is provided by the International Space Police Force (ISPF), initially made up of twenty ineffective part-time volunteers derisively nicknamed the "Star Cops". A decision is made to put the ISPF on a permanent, full-time footing, and veteran detective Nathan Spring is appointed -very much against his will- to lead the force. Many episodes deal with the efforts of Spring and his team to establish the Star Cops as a credible organisation as he sets up headquarters on the Moon, recruits new staff, dismisses corrupt officers, and works to extend the ISPF's jurisdiction to the American space stations and Mars colonies. At the same time the team investigates the cases that come their way, many of which are new crimes arising from the technologically advanced future society the series depicts, and the hostile frontier nature of the environment.

In total nine episodes of Star Cops were made. A tenth episode, titled "Death on the Moon", was planned but industrial relations difficulties during production led to it being abandoned shortly before recording was to commence. A combination of factors, including conflicts in the production team and poor scheduling, meant that the series never found a satisfactory audience and was cancelled after one season. In recent years, Star Cops has undergone something of a critical reappraisal and is generally hailed for being a good attempt at a realistic "High Frontier"

A new audio series featuring some of the original cast was released by Big Finish in 2018.

Star Cops offers examples of a number of tropes, including: