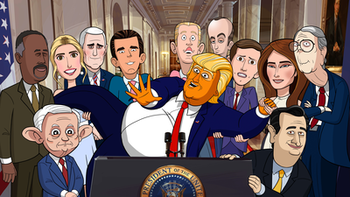 Since the launch of his presidential bid in 2015 (and for many years prior to that), there's been no shortage of media satirising the 45th President of the United States, Donald Trump. Animated sitcom Our Cartoon President separates itself from the herd of Trump impersonators and sketch shows in the following ways: it interprets Trump’s personal relationships with a wide range of people in his orbit, whether within his administration or outside of it... and it’s, well, animated.

Created by Chris Licht and Stephen Colbert, the show's roots lie in segments on the latter's talk show, The Late Show with Stephen Colbert, in which the animated President (and other notable politicians) would drop by to be interviewed. Established voice actor Jeff Bergman (who normally is cast as the replacement voice for a lot of older cartoon characters once voiced by Mel Blanc and Daws Butler, like Bugs Bunny, Porky Pig, and some Hanna-Barbera characters) fills the titular role.

The series began in February 11, 2018 and ran through November 8, 2020, having three seasons and a television special. Plans for a fourth season and possibly more beyond that were dependent upon the results of the 2020 Presidential Election on November 3, in the event that Trump received a second term. However, given that Joe Biden won the election, the series was not renewed, and the show officially wrapped up with the third season finale, covering the election and the results thereof.

Our Cartoon President provides examples of: