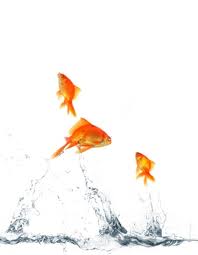 Piccolo: Is it over?
Vegeta: Not til the fish jumps!
[Fish jumps]
Vegeta: It's over.
— Dragon Ball Z: Super Android 13!
Advertisement:

Simply put, jumping fish is the presence of fish indicated by having one or more fish literally "jumping" out of a source of water (lake, river, etc.), especially when the characters suggest looking for food. These fish often soar two or three times their body lengths straight up before splashing back into the water, for no other reason than to advertise their presence.

In Real Life, most fish do not jump out of the water or, if they do, emerge only an inch or two to catch prey just on the surface. However, this can be used as a visual shorthand, to quickly show not only that there are hungry fish to be caught but also to cut down the time it would otherwise take to see if a body of water actually has any fish in it.

Not to be confused with Jumping the Shark. Or the Flying Seafood Special.