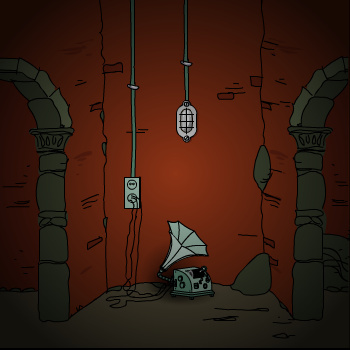 Submachine is the title of a series of Flash games created by Polish game designer Mateusz Skutnik and is the flagship series of Pastel Games.
Advertisement:

All of the games are point-and-click style puzzles and (excepting the four AU games) follow a continuous storyline. The general objective of each game is to escape from an enclosed (and usually submerged) location that houses a mysterious machine. As the story progresses, the player finds more and more about the history of the "submachines" through clues left behind by a mysterious figure named Murtaugh. One of the well-known characteristics of the game is a complete and total lack of any other living being, even animals.

The puzzles within the game rely on acute observation, a willingness to hunt for objects hidden in the exact opposite of plain sight, and other such tasks. However, the puzzles are very cleverly made, and on completion one usually feels some degree of self-satisfaction.

There are 10 main entries in the series, with 4 side-entries that sit outside the main series.

The games so far are:

The four side entries are:

also has his other games.

With the end of browser-based Flash support in 2020, the free online versions of the games are no longer available.

Some of the tropes found within these games are: