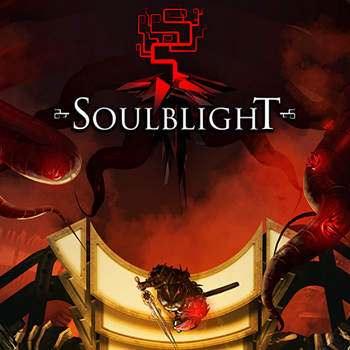 Soulblight is a top-down real-time Roguelike, developed by the Polish studio My Next Games. It was funded

on Kickstarter in November 2017 and released for PC through Steam on March 15th, 2018, then ported to Nintendo Switch on October 4th, 2018. Unfortunately, the port was initially riddled with technical issues, contributing to the game's low score on that platform.
Advertisement:

It is set in a dark fantasy world, where life and death used to war eternally, but eventually realized their battle was fruitless, and struck peace, represented in the creation of Soultree. It had nurtured the rest of the world and was protected inside the Sanctuary in kind. Now, however, it had developed a blight, and instead warps reality and summons terrors that torment the world's remaining inhabitants. The player character sets out to right this by any means necessary, but this won't be easy. In particular, you no longer gain experience as is common for the genre; the player character instead becomes Tainted as they accumulate negative personality traits, which helps them become stronger, but at an obvious cost to self.