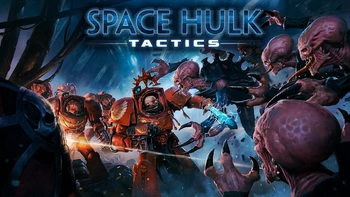 Space Hulk: Tactics is a video game adaptation of the board game Space Hulk, set in the Warhammer 40,000 universe, bringing a unique twist to the cult classic formula. The game is developed by Cyanide Studio and was published by Focus Home Interactive.

After a bloody campaign, the Space Marines of the Blood Angels chapter are diverted from their way home by a distress call: the forge world of Gorgonum signals the appearance of a space hulk -a gigantic mass of lost ships and other debris drifting through space- on a collision course with the world. The Space Hulk is full of ancient precious artefacts lost over time but is also home to the deadly Genestealers, ferocious six-limbed xenos whose talons can rend through the toughest armor. Captain Ubaldo thus commands his battle barge the Blood Crusader to stop at Gorgonum and orders Sergeant Tahariel's squad to destroy it. It falls to a single squad of Blood Angels to explore the Space Hulk, retrieve what they can, purge the xenos filth from the Space Hulk's entrails and finally put an end of the threat this Space Hulk poses for the Imperium.

Space Hulk: Tactics is based on the rules of the popular board game: it is a turn-based tactical game in which one or two players control two sides: first a squad of five Space Marines in Terminator armour, slow and cumbersome but equipped with firearms, second a swarm of Genestealers, coming in numbers and deadly in close quarters. The Space Marines must navigate a maze of corridors full of hazard, trying to cover every angle to protect themselves, while the Genestealer seek to annihilate the Space Marines. Each character on the map is alloted a set number of actions points, counting how many things a character can do during their turn (move, attack, watch over a position or use a special skill). The game is given a fresh new spin in the form of the unique Card system. Cards provide more ways to customize your squad and allow you to turn the tide of battle with buffs that trigger game-changing effects when used at the right moment, or that can be converted in order to perform more actions or bring in reinforcements.

Test your skills against other players in the expansive online competitive multiplayer. Command a swarm of Genestealers or a custom squad of different unit types from one of four Space Marine Chapters available – the Blood Angels, the Space Wolves, the Ultramarines, and the Dark Angels. The game includes a built-in intuitive map creation tool, to design your own original maps with custom objectives, and share them with other players!