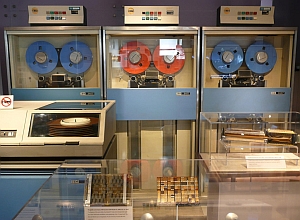 That belongs in a museum!

"Whoa, whoa, what's this? Are you kidding me? Are we using tape reel computers? Noooo! Wait... are those slots for punched cards?"
— Gordon Freeman

In older movies and TV shows, made before the invention of the personal computer, all computers had large nine-track reel-to-reel magnetic tape drives, which were always moving back and forth. They usually had banks of blinking lights as well. Most viewers were left with the impression that the tape drive was the computer.

This was primarily done because the computer itself is very visually uninteresting when in operation. When a Tape Drive is operating, there is obviously something going on - just look at the spinning reels! (This was also, it must be remembered, the era before monitors and graphical user interfaces were common, so computational results generally had to come from a printout.)

No longer as common, since in Real Life, almost everybodynote except certain industrial class backup systems has stopped using the old-fashioned 9-track mag tape reel because of size and cost. A 6250 bpi, 1600 foot tape could hold, at most, a little over 100 megabytes of data,note the normal maximum block size is 32760 bytes, and each 32760-byte block takes, with the gap following it, 5.992 inches and costs about US$12. By 2012, it was possible to walk into a stationery store and buy a microSD card the size of a man's thumbnail for close to $12, and it would hold at least 4 billion bytes, or about 50 times as much as the above tape reel. And that's not even the cheapest example. A top-of-the-line 4 terabytenote that's 4 trillion bytes hard drive could often be purchased at or under US$200.note  And the price has gotten even cheaper. As of December 2019, that 4 trillion-byte external hard drive is now available as made to military standards to survive a 4-foot drop and still work flawlessly, and costs $120. They're not kidding about the size ether, in Windows, right-clicking on a drive and clicking on properties on one of these will inform you that, coming from the factory, formatted, the drive has "4,000,412,387,568 bytes free." That means data storage on modern hardware is thousands of times cheaper today, and that's before factoring in inflation.note It's impractical to use because of extremely slow random access, not because of low capacity and high cost. Most have moved on to modern tape cartridge drives, which have a capacity of up to 12 terabytes.

In modern works, this trope shows up only in period pieces set before approximately 1975, or when dealing with technology built before then. Interestingly, although the use of audio cassettes for data storage on home computers was quite common in the late 70s and early 80s, no one ever mistook a tape deck for a CPU box.

Superseded by Computer Equals Monitor. It might seem weird, but the tape drive is not exactly extinct

as a storage medium, and modern ones as of June 2018 can store up to 12 TB of data, or up to 30 TB if hardware compression is employed. Their niche today is generally backups for large multinational enterprises. Of course it's worth noting that they currently have no real technical advantage over hard drive backups, other than being compatible with older systems. As for appearing in film, most filmmakers give the modern drive a pass since modern LTO tape drives don't look anything like those tape drives of old and are so uncommon that not many people have seen one; the tapes look like small videocassettes (nothing like the big open-reel tapes that used to be common) and the drives mount in the same bays as CD/DVD drives. Not to mention that the lack of activity indicators on one and the inability to see the tape reels spinning, as well as the above-mentioned speed issue, makes it a very boring subject to film.