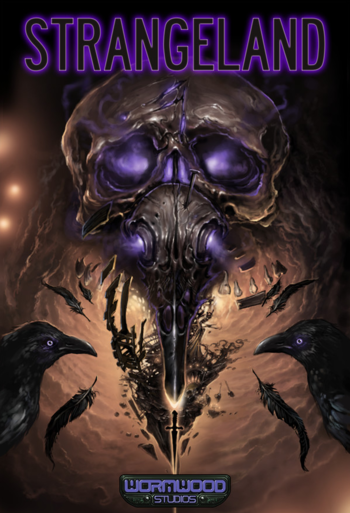 "If a man writes 'death' a thousand times, he starts to wonder: 'is that even a word?' But it is, oh how it is."
— The Operator
Advertisement:

Strangeland is a Surrealist Psychological Horror Point-and-Click Adventure Game, developed by Wormwood Studios (developers of Primordia (2012)) and published by Wadjet Eye Games on May 25th 2021. The game cites Sanitarium, Dark Seed and the works of H. R. Giger as its main inspirations, and it shows.

A stranger wakes up just outside a grotesque carnival tent. After stepping inside the tent, he witnesses a woman with golden, shining hair jump down a well to her death. The stranger recognizes the woman, but cannot recall her identity. He decides to follow her down the well, to his own death, and wakes up just outside the carnival again, right where he started. Death doesn't work the same way in Strangeland.

The stranger decides he has to get to the bottom of this. He has to remember who that woman is, who he is. He can save her. He just has to keep trying. Right?

Strangeland is available on PC, via Steam, GOG, and Humble.