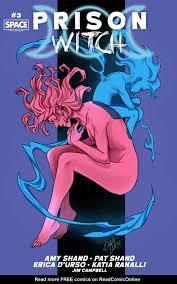 "Have you ever felt as if you're the only real person in the world? That everyone else is in on some big, cosmic game designed to fuck with you?"
— Cameron
Advertisement:

Prison Witch is a supernatural comic-book series created by Amy and Pat Shand, with art by Erica D'Urso. It is published by Space Between Entertainment.

Sentenced to a five-year stint in prison after a violent assault, things are not going well for Cameron Turner. For starters, an angry would-be gangbanger wants her dead. For another, she may or may not have an actual demon living inside her. Luckily for her, a chance encounter brings her to the attention of a secret coven of witches in the prison, who take her in and offer her guidance. But first she has to survive the above-mentioned gangbanger, who really wants her dead.