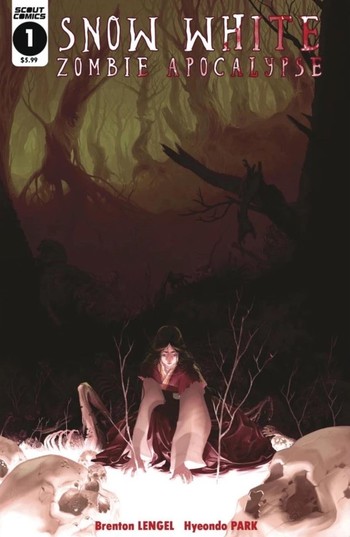 Snow White on the first issue's cover
"She is in A COFFIN. Her Skin is WHITE AS SNOW! What about that does not add up to necrophilia?"
— Rapunzel, upon finding Prince Charming kissing an unconscious Snow White
Advertisement:

Nominated Comic Book series by Brenton Lengel, about the titular Snow White awakening to Prince Charming's kiss, 28 Days Later. It is described by publisher Scout Comics as "a story of deep woods and old magic mixed with a healthy dollop of blood, sex, Kung Fu and gender politics." This Darker and Edgier treatment places it firmly within the tradition of Grimmification that tends to happen to Snow White re-imaginings.

The story centers around a Love Triangle between Snow White, Prince Charming and Rapunzel. According to the series creator

SWZA is an example of Exactly What It Says on the Tin. The series premiered on October 30th 2019 and received a very positive audience and critical response

. It is somewhat rare in the world of Literary Mash-Ups in that it is a Comic-Book Adaptation that began as a stage play

On February 18th, 2020, a Kickstarter was launched to fund Issue #2. It reached its goal on March 2nd, 2020. Since then, they have gone on to get funding for a third issue, and are currently trying to get funds for a fourth as well.

In August 2020 the series was nominated for two Ringo Awards.