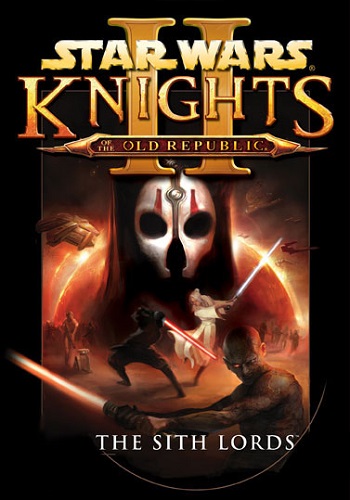 This time, your choices affect everyone around you.
"Take the greatest Jedi Knight, strip away the Force, and what remains? They rely on it - depend on it, more than they know. Watch as one tries to hold a blaster, as they try to hold a lightsaber, and you will see nothing more than a woman – or a man. A child."
— Kreia
Advertisement:

The Sith Lords tells the story of a former Jedi who was cast out of the Order and lost the ability to feel the Force. Nearly a decade later, the Exile finally returns to the Republic, only to find it on its knees in the wake of the Jedi Civil War five years before. After linking up with a Republic warship, the Exile is brought to the brink of death when Sith forces attack the vessel, leaving the former Jedi comatose and adrift in the badly damaged Ebon Hawk.

Soon thereafter, the Exile awakens in a mining complex whose inhabitants have been slaughtered by their own droids, with the sole survivors being an old ex-Jedi named Kreia, a smuggler named Atton Rand, and the Hawk's utility droid, T3-M4. The four band together, escaping the complex just as the Sith arrive, and Kreia takes the Exile in as her apprentice. The group proceeds to seek out the remains of the now-devastated Jedi Order, finding allies in everyone from a technician who previously served under the Exile to the new Mandalore as he seeks to reunite his scattered people under the leadership of his clan, in the hopes of finding the remaining Jedi Masters and defeating the Sith. However, it quickly becomes clear that Kreia is not quite what she seems—nor is anyone on the Ebon Hawk, the Exile included...

Despite being released rushed and unfinished due to a Troubled Production and Executive Meddling (the ending in particular was disjointed and nearly-absent, with many subplots Left Hanging), the game was still a relative success and, like its predecessor, firmly found its place in Star Wars Legends canon, being referenced heavily by later works. The game actively deconstructs the very foundations of the setting (such as The Force itself), and the general mood is noticeably Darker and Edgier than in the original, borrowing themes from Planescape: Torment.

A notable facet of the game's rushed status is that much of the missing content — including large portions of the ending — still exist in the game's files, unimplemented due to further Executive Meddling preventing a post-release content patch. Much of this lost content has been restored by The Sith Lords Restored Content Mod (TSLRCM for short), which can be downloaded from numerous sources, including Deadly Stream

An updated version was released on Steam on July 21st 2015, adding support for widescreen, achievements, and mods through the Steam Workshop, including the aforementioned TSLRCM. A Nintendo Switch port was announced in May 2022 for a June 8, 2022 release, with the TSLRCM announced as free DLC.

For those who are curious, the game's player character is canonically light-side female named Meetra Surik, although the player is free to choose the protagonist's gender and alignment for themselves in the game proper.

While the game was later deemed Legends in 2014 with the reboot of the Star Wars Expanded Universe, some themes of the story were used in Rian Johnson's The Last Jedi, the second film of the Star Wars sequel trilogy, with an old and embittered Luke Skywalker having similar negative views of the Jedi, the Sith and the Force to Kreia's. Also, some elements of the game have been canonized in Broad Strokes in the post-reboot Expanded Universe, such as Meetra Surik being name-dropped in The High Republic and the Sith temple on Malachor appearing in Star Wars: Rebels.

The Sith Lords provide examples of: