Literature / The End of Eternity 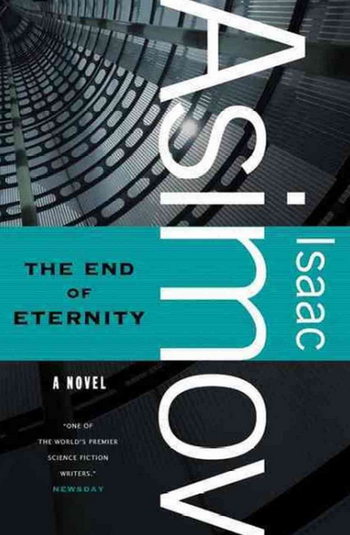 The End of Eternity is a science fiction book by Isaac Asimov.
Advertisement:

The story is set in a world where Time Travel is highly sophisticated. A group of people known as Eternals reside in a space outside of our normal reality, but linked to it via vehicles called Kettles. They recruit people from the normal timeline, and control the period from the 27th Century to the 70,000th Century. Within this period, they are constantly making Reality Changes, which are used to erase wars and technological advances deemed contrary to the human race. One of the main themes is that space-travel, a staple in Asimov's other science fiction works, has been repeatedly stomped out in order to preserve the status quo and keep humanity on Earth (not out of sheer malice, but because advances in space travel always seem to coincide with increased drug use, crime, etc., so these advances are undone "for the greater good").

Eternals are composed of several groups — Sociologists, Technicians, Life-Plotters and Computers note "Computer" in this novel has its original meaning, "person employed to do computations". Electronic devices built to do computations are called Summators or computaplexes. are mentioned, in addition, there are also Maintenance people. Sociologists accumulate data and analyze it for possible Reality Changes. Computers narrow down when and where the Reality Change takes place, and the Technicians pinpoint and make the Reality Changes themselves. Because of this, Technicians are highly revered, yet feared. They are also supposed to suppress all emotion because of the nature of their job, and thus rarely find love.

The start of Eternity is explained to be a time paradox. The man who "discovered" time travel in Primitive times (before Eternity) wrote a journal. In the journal, he detailed his life, in which he is trained by the main character and his Computer superior and sent back in time to restart the loop. The Computer superior knows all of this, but the main character and their trainee do not.

The story revolves around Andrew Harlan, a particularly skilled Technician, and his role in the ending of Eternity. Large spoilers — click to reveal The people who blocked Eternity's access to the future centuries after the 70,000th have discovered a different form of time travel, and used it to discover that in the far future, humanity no longer exists. The reason for this is that once they finally left Earth with space travel, they found the galaxy already populated by other species, and were thus restricted to Earth. Thus enclosed, they decayed and died. To correct this, they cut off Eternity's access to their Centuries to prevent Reality Changes from affecting them. They then decide to send a woman backward in time to undo Eternity and open the galaxy to humanity. The woman chooses Harlan as the key because through her study she came to love him, and because his scenario (the breaking of the loop) is the easiest way to end Eternity.

The book, though relatively obscure (for a science fiction book written by Isaac Asimov), has achieved an interesting place in the minds of Foundation fans who either consider the Twist Ending to be the reason the Robots/Empire/Foundation series even began or others who (plausibly) claim that The End of Eternity is not part of the Foundation series's canon. The former seem to be the majority and considering how Asimov's fanbase still survives, it's strange that it took so long for the book to be printed again.

(If you're looking for the completely unrelated RPG, that's on the wiki as Resonance of Fate, its English title.)

While this means little to locals, the stranded time traveller knows that Mission Control in the future has a large collection of 20th century advertising. The atomic bomb anachronism tells Mission Control where and when he is.