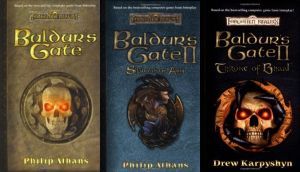 The Baldur's Gate video games received three Novelizations, corresponding to the three biggest entries in the series. They are: