Video Game / Lords of the Realm 2 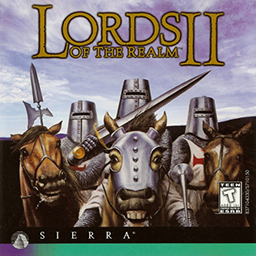 The king has died without an heir, and five nobles take it upon themselves to claim the crown. Who will be the next ruler of the lands?

Lords of the Realm 2 is a Turn-Based Strategy, Real Time Combat game released by Sierra in 1996, as a sequel to the original Lords of the Realm game released in 1994. It was followed up by an expansion, titled Siege Pack, which offered improved AI, new maps, a new campaign, and a skirmish mode, which allowed you to fight pitched battles both in open field and in siege attacks. A Real-Time Strategy sequel, titled Lords Of The Realm 3 was released in 2004.

The game consists of building up your economy by tasking your peasants with various tasks, such as farming, mining, building castles or creating weapons. As your county grows stronger, you can then raise an army to attack and conquer other counties with. There are also rival lords who will attempt to claim the throne for themselves: the Baron, the Knight, the Countess, and the Bishop, each with their own personalities.