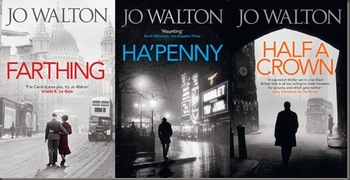 The "Small Change" trilogy by Jo Walton — consisting of Farthing, Ha'penny, and Half a Crown — is a series of detective novels set in an Alternate History where World War II ended with Hitler still alive and in possession of most of continental Europe.

Farthing starts out as a classic English country-house murder mystery, investigated by Inspector Carmichael of Scotland Yard, but becomes darker and more complicated as Carmichael begins tripping over the political threads that run through the case. Things go downhill from there, for Carmichael personally and for England as a whole.

The short story "Escape to Other Worlds With Science Fiction"

is set in the United States in the same timeline, with different characters.