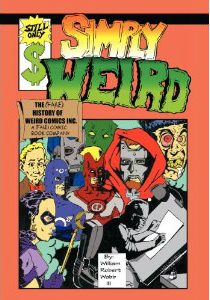 Simply Weird: The (fake) History of Weird Comics Incorporated, A (fake) Comic Book Company is author William Robert Webb III’s love letter to comics. It’s about the varied history of WCI or Weird Comics Incorporated, a comic book company that Webb made up. It chronicles the lives of the Winecrest family who run the company from its inception during the Golden Age of Comics until the end of the company in 2007. The book covers several pivotal events in comic book history and has shown how those events affect the company (and the lives of those who work there). Overall it’s a humorous look at comics through its various ages. Compare it to Steve Aylett’s book Lint, a satirical mock biography of a fictional Science Fiction writer. Webb has cited Lint as an influence on Simply Weird along with The Amazing Adventures of Kavalier and Clay and several nonfiction books detailing various aspects of the history of comics.

and as an ebook here

. It is also available at Barnes and Noble in Paperback

. Also available on Amazon.com in Paperback