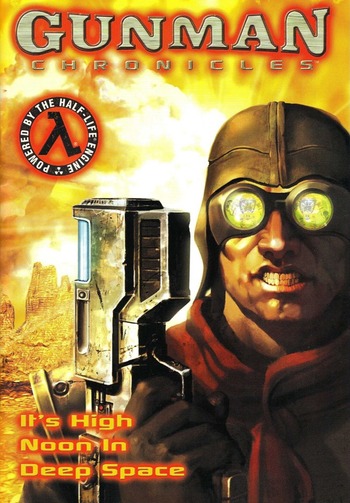 Gunman Chronicles is a first person shooter developed by Rewolf Software and published by Sierra. It is based off the same engine as used in Half-Life. Originally starting development as a mod, it grew to the point that Sierra hired the developers for an official release.

Its standout feature was the enormous amount of Secondary Fire options: rather than simply giving each weapon a specialized alt-fire, each weapon had anywhere from three or four to dozens or hundreds of configurations for fire modes. For a good starting impression, the standard pistol you began the game with had enough modes to essentially double as a normal rapid-fire pistol, shotgun, SMG, or even a sniper rifle. Most other weapons were considerably more complicated.

In the main portion of the game, a set of space rangers - known as the Gunmen - are a military-type group consisting of a uniform similar to Space Cowboys. Five years ago prior to the game's events, several platoons of Gunmen were sent out on a mission to a planet known as Banzure Prime by their general to investigate the sudden loss of contact with the science team stationed there for unknown reasons. After some time has passed, they are suddenly attacked by alien creatures dubbed as Xenomes - in this case the apex species, the Alpha Xenomes, which are towering worm-like creatures. As the ensuing battle between the aliens and Gunmen persist, the general and his ship is captured in the jaws of an Alpha Xenome, presumably consumed afterwards. The player character, Major Archer, then decides to order the remaining Gunmen to retreat off planet, unknowingly leaving the general to die, and is commended for his efforts afterwards.

Five years later, Archer and his platoon are sent out on a similar mission to investigate a Gunman distress signal on a jungle planet inhabited with dinosaurs. The distress signal turns out to be a trap, and its revealed that the general survived his unfortunate experience, has gone rogue, and decides to take out his anger on Archer and the Gunmen faction overall for leaving him for dead, with the help of other rogue Gunmen. Archer now must survive whatever is thrown at him, whether it be hostile lifeforms or an outdated AI mainframe that's also gone rogue, no matter the cost.