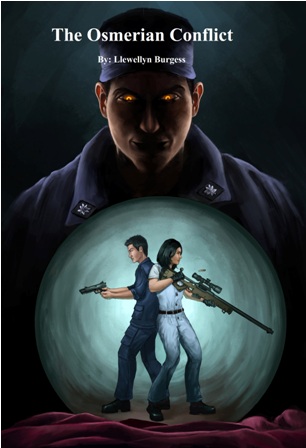 The crew has some trust issues.
"That might be your clue. Don't you guys have a saying if it's too good to be true, then it probably is?"
— Fae Kirin to Sonluth Eclipse
Advertisement:

The Osmerian Conflict is a science fiction novel written by Llewellyn Burgess and originally published on 5 March 2014. It takes place in the wider universe around three hundred years after the start of the Space Exploration (SE) Era. The Terrans are currently allied with the Silicians in an armed conflict with the titular Osmerians. While the Terrans bear the brunt of the military burden, they develop technology to stem the tide of the war. This is where the story picks up to as newly graduated Sarah Collins is allowed to command her first mission in the form of a prototype battleship code named RAINE. It details the trials and tribulations of a crew fresh out of the academy on a new prototype spaceship as they go from naive inexperienced crew to understanding the truer and deeper meaning and context of interspacial conflict as well as the politics involved with such ordeals.

Can be purchased from Amazon here

There is now a sequel called The Fight for Home