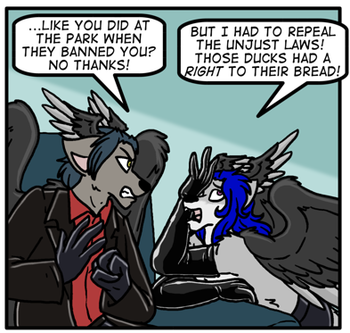 Just another day with Daryil
Advertisement:

(Full Title Project Future: The Future History of Jakob Pettersohn) is one of a number of stories by J.P. Morris inspired by Dan and Mab's Furry Adventures and adapted into a webcomic of its own by him and Merlin Missingham.

Taking place (roughly) 150 years after the events of DMFA the comic involves cyborgs, androids, artificial souls, regrets and the story of one Jakob Pettersohn.

The first page can be found here

Comics/Stories in the Project Future canon include:

Project Future uses and expands on the world shown in Dan and Mab's Furry Adventures but as noted on the site may not match DMFA canon 100%.

Note: As with DMFA, 'Beings' are the strip's human equivalent in that they lead relatively short lives and have little or no magic. 'Creatures' on the other hand live far longer and are both magically and physically powerful.