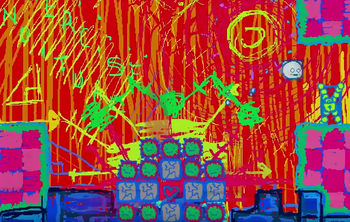 is the Spiritual Successor to Craz'd!, released on May 6th, 2014. Being made several years after the original, it is very noticeably more focused and unique. Unlike the last game, which developed a plot partway through, this one is more of a carefree romp.
Advertisement:

Although the technical end of the game can be reached quite easily, the true point of the game is to find every little heart, upgrade and boss you can.