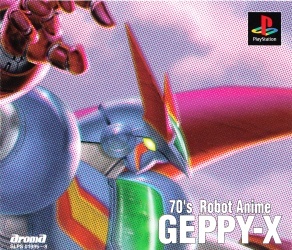 Full title: 70's Robot Anime Geppy X: The Super Boosted Armor. As the title suggests, Geppy X is an affectionate parody of the Super Robot shows of old in the form of a Japanese 2D shooter for the Playstation spread across a whopping four discs. It revolves around the battle of the titular Getter Robo -style mecha, piloted by The Hero Kei, The Lancer Jin, and The Big Guy Riki, and their Super Robot allies against the invading forces of the Space Devil Empire and their legions of Space Beasts. The entire game is set up like an actual anime, complete with an opening sequence before each level, anime-style cutscenes and stock footage, and fake commercials between mission halves. During gameplay, the Geppy X can transform into one of the robot's three forms, air-based X-1/X-Fire, sea-based X-2/X-Thunder, and ground-based X-3/X-Tornado, each with a chargeable primary and secondary weapon and ultimate attack.