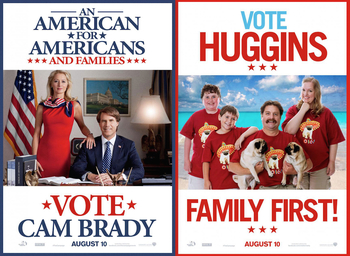 May the best loser win.
Advertisement:

A 2012 political comedy starring Will Ferrell and Zach Galifianakis. Ferrell plays Democratic Congressman Cam Brady, who is running for his fifth term unopposed. After his public image is wrecked following a certain promiscuous act, Marty Huggins (Galifianakis), tourism director for the town of Hammond is chosen to run against Cam. Hilarity Ensues.

Tropes applying to this film: