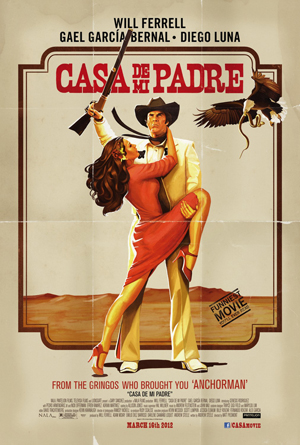 The funniest movie you'll ever read.
Casa de mi Padre (House of my Father or simply My Father's House) is a parody of Spanish soap operas, starring Will Ferrell, directed by Matt Piedmont and written by Andrew Steele. (With all three reuniting for the similarly absurdist, equally specific Spiritual Successor The Spoils of Babylon.) It tells the tale of Armando Álvarez, who works on his father's ranch. However, they are in financial trouble. The whole family counts on his brother Raúl to fix their financial woes. It's also all in Spanish, despite the star never speaking a word of Spanish before shooting.