Film / The Facts in the Case of Mister Hollow 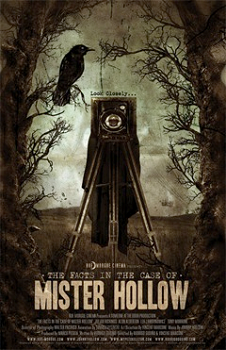 In 1933, Johnny Hollow took a photograph of a woman holding a child and three men at a campsite. However, the camera pans around the photograph to reveal that things are not quite right. What is that weird symbol on everybody's wrist? What are they going to burn in that fire? As the movie progresses, the photograph changes, getting progressively more unsettling. Watch all six minutes of it here