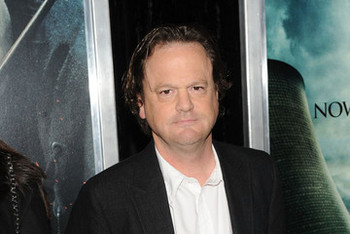 Steven Keith Kloves (born March 18, 1960) is an American screenwriter who wrote the scripts for all the Harry Potter films except for Order of the Phoenix. He bowed out for Phoenix to write the screenplay for a movie version of The Curious Incident of the Dog in the Night-time, a project which ended up in Development Hell anyway. Prior to his work on the Potter series, he wrote and directed The Fabulous Baker Boys, which coincidentally is one of J. K. Rowling's favorite films. His other credits include writing Wonder Boys and co-writing The Amazing Spider-Man.

Throughout his decade-long work on the Potter series, Kloves had to consult Rowling for information about which details would come to play in future installments. She refused to tell him how the series would end, but she still told him more than anyone else, "which I probably shouldn't say on screen, or they'll kidnap and torture him

." Kloves and Rowling developed a friendly working relationship and both have spoken highly of each other. Kloves saying Hermione was his favorite character is what got him the job - it also led to half the fan base accusing him of making Ron dumber and weaker in the films than he was in the books.

Kloves has also returned to the franchise with the prequel Fantastic Beasts series. He helped Rowling craft the story of the first two films and was given a producer credit. For the third film, he was bumped up to a co-writing credit to help Rowling better translate her style to the film medium after the second received mixed to negative critical reception.