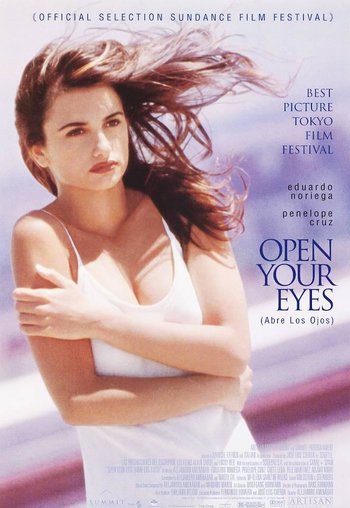 Open Your Eyes (Abre los Ojos) is a 1997 film from Spain directed by Alejandro Amenábar.

César is a handsome, charming, very rich young man in 1997 Madrid. He lives a life of clubbing and bedding hot young ladies, his latest casual sex hookup being a woman named Nuria, who is starting to get too clingy for César's comfort.

At his own party César meets Sofia (Penélope Cruz), a young aspiring actress. He is smitten; the playboy feels himself falling in love immediately. But his chance at love is tragically cut short. Nuria, who has been following him, offers him a ride as he leaves Sofia's apartment the very next morning. He unwisely accepts—and Nuria deliberately crashes the car into a concrete wall.

Nuria is killed. César survives, but he suffers ghastly facial disfigurement, injuries that leave him bitter and filled with rage at the world. He tracks down Sofia, but she rejects him. Drunk and alone, he passes out on the street.

However, the next morning, Sofia finds him, still passed out on the sidewalk. She apologizes, and professes her love, and they kiss. The plastic surgeons who told him that his face was too badly destroyed for any reconstructive surgery now tell him they've made a breakthrough, and they restore his pretty face. César has his life back, and love with Sofia, but strange things start happening. He begins to have hallucinations suggesting that his face actually remains horribly scarred. A strange man starts appearing and insisting that César's life is a dreamworld. And somehow, his beloved Sofia turns into Nuria, who is dead...or is she?

Got a Foreign Remake just four years later as Vanilla Sky, which starred Tom Cruise as the man who suffers the scarred face, Cameron Diaz as the jilted lover, Kurt Russell as The Shrink, and Penelope Cruz reprising her role in English.