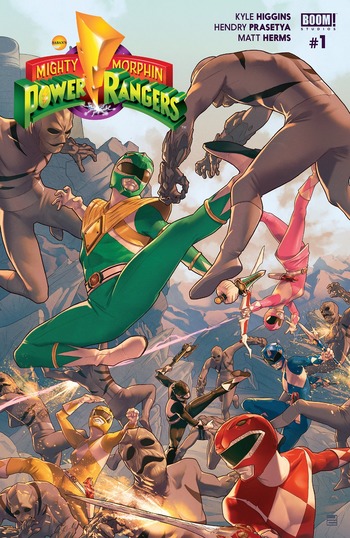 Mighty Morphin' Power Rangers is a 2016 comic book series based on the Power Rangers franchise, specifically the first instalment of the same name. It is published by Boom! Studios and is the first comic in their Power Rangers line, initially written by Kyle Higgins (Nightwing, Green Lantern), while backup stories featuring the infamous duo Bulk and Skull were written by Steve Orlando (Midnighter, Supergirl (Rebirth)).

While the series is based on the core concepts of the TV show — and was initially intended to follow its continuity until right after the introduction of the Green Ranger, where the series starts off — it tells original stories, uses a modernised setting and has a more mature tone and writing.

Following the Mighty Morphin' Power Rangers: Shattered Grid arc, the series focused on a different team of Power Rangers, made up of Rangers from various other teams in the history of the franchise. This incarnation of the series was written by Marguerite Bennett (Animosity, Batwoman).

The subsequent Necessary Evil storyline returned the focus to the Mighty Morphin' team, albeit after a Time Skip of roughly a year, along with various changes to the status quo that correspond to those from the second season of the original show. It was written by Ryan Parrott (Go Go Power Rangers, Star Trek: Manifest Destiny) and served as the final storyline of the series.

After 55 issues, the series ended in 2020. It was succeeded by two ongoing titles, launched as part of the "Unlimited Power" initiative: Mighty Morphin (2020) and Power Rangers (2020), both written by Parrott.