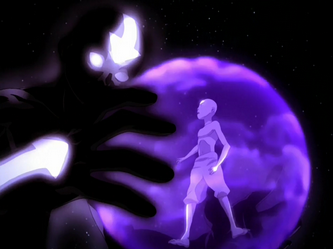 Aang attempts to master the Avatar State.
"There are seven chakras that go up the body. Each pool of energy has a purpose and can be blocked by a specific kind of emotional muck. Be warned: opening the chakras is an intense experience, and once you begin this process, you cannot stop until all seven are opened. Are you ready?"
"...I'll do whatever it takes."
Advertisement:

After splitting up in the previous episode, the characters find themselves in uniquely separate situations:

Aang, meeting with Guru Pathik, goes under an intense training regimen designed to open his spiritual pathways and allow him to gain control of the Avatar State. Sokka, after two years, is finally reunited with his father. Toph, having been tricked and captured by Xin Fu and Master Yu, is being carted off back to her parents' estate. Katara is helping the Earth King and his generals plan for the invasion, unaware that Azula, Mai, and Ty Lee have infiltrated the city and are making plans to take over. And Zuko, after going through a long night of fever dreams and wrestling with his subconscious, has come out of the experience uncharacteristically serene.

I am the greatest Earthbender

Toph declares herself the greatest Earthbender in the world after discovering Metalbending and defeating her would-be kidnappers.

I am the greatest Earthbender

Toph declares herself the greatest Earthbender in the world after discovering Metalbending and defeating her would-be kidnappers.