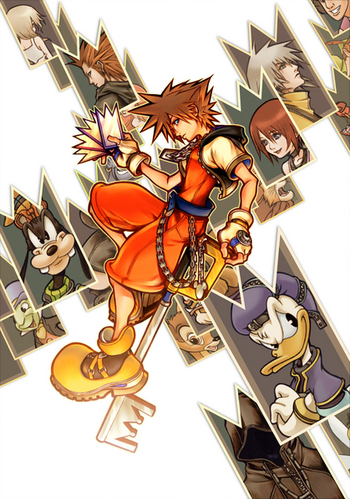 Not to be confused with the other card-game playing kid with Anime Hair.
"Adventure is in the cards."
Advertisement:

After the events of Kingdom Hearts I, Sora, Donald, and Goofy are wandering the worlds in search of King Mickey and Riku. Eventually they are led by a cloaked figure to a strange place called Castle Oblivion, where memories come to life within its walls as illusions. As they climb the floors and partially relive the events of their previous adventure, they learn about the strange girl known as Naminé from Sora's past and are antagonized by a strange group of people called the Organization (Organization XIII in later games). Though not everything is as it appears in the castle, as memories can be tricky things...

Rather than the usual Action RPG style of combat, Chain of Memories uses a combination of action and "card battling". The player must prepare a deck of cards to use in their battles, with those cards determining every action Sora takes sans movement. Cards can also be combined in "sleights" or special moves that tend to be very powerful, but come at the cost of using up cards completely for a fight.

Chain of Memories was later remade as a PlayStation 2 game (titled Re:Chain of Memories) as part of the Japan-only release of Kingdom Hearts II: Final Mix+. It was (much later) released as a standalone PS2 game in North America. Europe and Australia never got it, but did get Kingdom Hearts HD I.5 ReMIX, which contains Re:Chain of Memories remastered in HD. The remake replaces the 2D sprite art with 3D graphics, has voice acting in the Castle Oblivion cutscenesnote Otherwise, this version still uses pure text, although small voice clips can still be heard during the battles, which mainly consist of voice grunts, and other battle clips that previously appeared in both Kingdom Hearts, and Kingdom Hearts II., adds an additional boss battle and a new form for the Final Boss, includes some new Attack Cards based off of Keyblades and Enemy Cards based off the Organization XIII members that appear in Kingdom Hearts II, makes small tweaks to the battle system such as adding or removing some sleights, and completely removes the Player Versus Player mode. The HD I.5 ReMIX version is mostly identical to the the PS2 remake, but has higher graphics resolution, trophy/achievement support for the various platforms, and replaces the Attack Cards of the II Keyblades with some from Kingdom Hearts: 358/2 Days.

Has a Lighter and Softer manga version.

"In this place, to find is to lose and to lose is to find."
Feedback