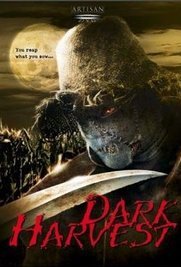 "You reap what you sow..."
Advertisement:

Dark Harvest is a 2004 Direct to Video Slasher Movie.

After his father dies, a guy inherits the relative's farm. He invites his friends to come help him fix up the place. While they're there, they're hunted by evil undead scarecrows.

Two sequels were released the same year as this one, subtitled The Maize and Scarecrow.

Not to be confused with the Invader Zim episode or the web series that's part of The Slender Man Mythos.