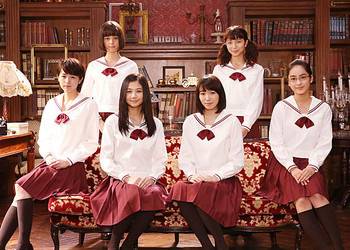 The Dark Maidens (暗黒女子) note Ankoku Joshi - literally "Darkness Girls" is a 2017 Japanese mystery/horror film, based on a 2013 novel, of the same name, written by Rikako Akiyoshi.

Itsumi Shiraishi (Marie Iitoyo), the president of the Virgin Mary Girls' High School's Literature Club, has just died in an apparent suicide. For the Literature Club's last meeting of the semester, the club's new president Sayuri Sumikawa (Fumika Shimizu) gathers the members and gives them an opportunity to share their stories and eat together. The theme of their meeting is Itsumi's suicide. Each of the four members — Mirei (Yuna Taira), Akane (Riria Kojima), Shiyo (Nana Seino) and Diana (Tina Tamashiro) — then proceed to tell of their experiences with Itsumi, as well as holding another club member responsible for her death.