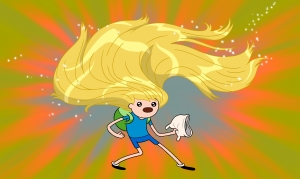 His hair is AWESOME!
If there is one thing all we tropers know, it is that some shows are filled to the brim with epic. Adventure Time is one such show. This is a list of some of the most awesome moments in the show.
Advertisement:
open/close all folders
General
Season 1
"Slumber Party Panic"

Season 2
"It Came from the Nightosphere"

"Loyalty to the King"

"Blood Under the Skin"

"The Chamber of Frozen Blades"

"Belly of the Beast"

"Memory of a Memory"

"From Bad to Worse"

Advertisement:
Season 4
"Hot to the Touch"

"Return to the Nightosphere"

"Beyond this Earthly Realm"

"All the Little People"

"The Party's over, Isla de Senorita"

"We Fixed a truck"

"Escape From the Citadel"

"Come Along With Me"