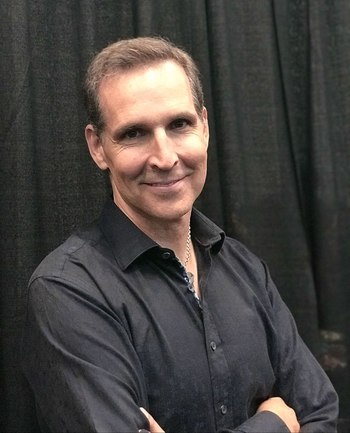 "All of a sudden, the editor sort of gave me heck: 'Todd! You gotta stop doing those—those—spaghetti webbings!' Ohhh, he gave a name to it! Of course, I did what all smart people do, you always say yes, and I actually made the spaghetti webbing twice as long. The next two or three times they called me in, I'm like, 'Why are we having this conversation? Your job is to hire me to sell books. You don't have to like me, you don't have to like my artwork, and we don't have to share burgers. All I have to do is sell books. I am doing that better than anybody in this corporation!', and it was that stuff that eventually drove me away from the company."
— Todd McFarlane on leaving Marvel, Superheroes: A Never-Ending Battle ("A Hero Can Be Anyone")
Advertisement:

Todd McFarlane (born March 16, 1961) is a Canadian comic-book writer and artist, most famous for being co-creator of Spider-Man’s villain Venom and being one of the co-founders of Image Comics, where he created the character of Spawn.

He started his career in the mid-80s working for both Marvel and DC. In 1988 he started doing the art for The Amazing Spider-Man, for which he gained immense popularity. The extremely dynamic way in which he drawn Spidey and the overall greater details of his artwork where a big hit with both fans and other artists, and he soon became one of the precursors of the superstar artist era of The '90s.

Of course this fact soon made McFarlane want to have more creative control over his own work. When Marvel failed to provide him with what he wanted, Todd left the company. He and six other former Marvel artists would later found Image Comics out of their desire to publish "creator-owned" content, independent from a central editor.

Outside of comics, Todd is also responsible for the creation of McFarlane Toys, a toy company that focus on producing high-end action figures with ridiculously detailed sculpting which are made of better quality materials than those used by their competitors. This pretty much changed the toy industry, inspiring a host of other companies to produce their own high quality action-figures.

His company, McFarlane Entertainment, also produced the Spawn animated series for HBO, and doing the animated sequences for a series of music videos.

He wrote a new Spawn movie, which is currently in Development Hell.