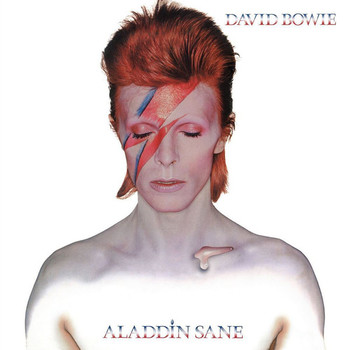 Aladdin Sane is the sixth studio album by David Bowie, released in 1973. A loosely-constructed semi-sequel to The Rise and Fall of Ziggy Stardust and the Spiders from Mars, it's been described as "Ziggy goes to America" by Bowie. The Spiders from Mars would be disbanded at the end of the subsequent tour that July, via an infamous impromptu announcement from Bowie that "not only is it the last show of the tour, but it's the last show we'll ever do," the vague wording of which led fans and press to believe for a short while that he himself was quitting the music industry altogether. In reality, he'd keep going all the way until his death in 2016, barring a hiatus from 2006 to 2011.

The character of Ziggy Stardust, meanwhile, was given one last hurrah that fall via "The 1980 Floor Show", an episode of the American variety TV series The Midnight Special that acted as a transition between the speculative sci-fi of the Ziggy character and the urban dystopia of Bowie's forthcoming album Diamond Dogs (Pin Ups was released midway through the performance's taping). Bowie would permanently retire Ziggy immediately after, though maintained elements of the look for another year or so.

The album is probably best known not for any of the music within it but for its cover art, with the front portrait of Bowie with a lightning bolt painted across his face becoming so emblematic of the musician in the decades after Aladdin Sane's release that it became the basis for the "singer" emojis (👨🏼‍🎤 and 👩🏼‍🎤) a few years after Bowie's passing in 2016. That said, the album's music still stands as a critical turning point for Bowie, introducing a number of jazz and art rock influences that would come to define his later output, especially once he dropped the glam act entirely just two years after this album's release. As such, Aladdin Sane sound-wise is much more of a Genre Roulette than Ziggy Stardust was, featuring mixes of conventional hard-tinged glam rock, piano-driven jazz fusion, art rock, and even rockabilly and Doo-wop throwback.

Aladdin Sane was supported by four singles: "The Jean Genie", "Drive-In Saturday", "Time", and Bowie's cover of The Rolling Stones' "Let's Spend the Night Together". For Bowie, this was an unprecedented amount of singles for a single album; up until now, the most an album would get was just two.