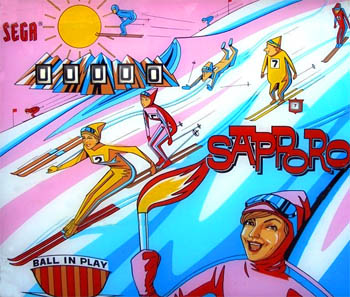 Sega goes to the Olympics without Mario's help.
Advertisement:

Sapporo is a single-player electro-mechanical Physical Pinball Table by Sega Enterprises of Japan. It was released in 1971 to commemorate the 1972 Winter Olympics in Sapporo, Japan.

The game itself depicts a group of skiers enjoying a day on the slopes. Touch the three numbered targets to light the Extra Ball, roll over the top three lanes to open the ball return gate, and get into the top saucer to slalom downhill for more points. The main attraction, however, is the Ski Jump lane on the left side of the playfield; enter it to vault down the mountain, then demonstrate your athletic prowess by timing your launch for maximum distance and a perfect score.

Among Sega Enterprise's small pinball library, Sapporo is notable for its association with the first Winter Olympics held in Asia. Unfortunately, only a handful of machines remain operational today — one is playable at the Japan Game Museum in Inuyama, Japan, while another is kept at Sega's corporate headquarters and occasionally shown at company exhibitions.