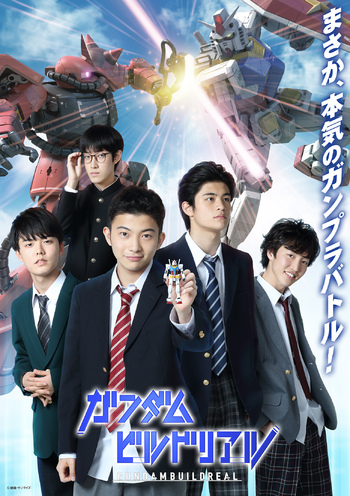 Gundam Build Real (ガンダムビルドリアル) is a Japanese Live-Action web series, uploaded on the official Gundam Channel on YouTube. Like SD Gundam World Sangoku Soketsuden, it has a monthly schedule, with each episode releasing near the end of every month from March 29, 2021 onward (The exception being Episode 5, which released in the middle of July on the 13th). As of December 1st, all six episodes are available on GundamInfo YouTube channel

Our protagonist Hiro created Team BRIGHT along with his friends when they were in elementary school. The team attracted much attention, especially armament specialist Sota, but their Gunpla (an RX-78-2 Gundam) disappeared on the day before the tournament, leading them to quarrel and split up. Now, four years later, the former group record-keeper Imaizumi sends the other members a video and they meet at their old school. However, Imaizumi isn't there, and Hiro and his friends find something else instead; a Real Grade model of RX-78.

This rekindles Hiro and Sota's passion for Gunpla battling after they first test it on their first Gunpla Battle since elementary-school, and thus they decided to put the team back together to participate for the National Tournament, all the while overcoming the many trials that awaits them.

Tropes associated with Gundam Build Real include the following: