Film / The League of Extraordinary Gentlemen 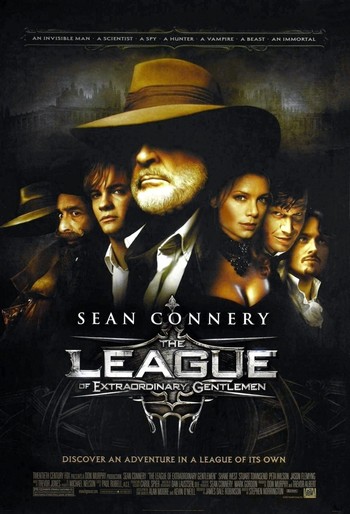 A 2003 Film Adaptation of Alan Moore's popular graphic novel of the same name, directed by Stephen Norrington and featuring a cast headed by Sean Connery, in his last live-action role before his retirement from acting and subsequent death.

It has the same basic premise and about half of the same characters, but is otherwise rather a departure from Moore's original. Joining the League in the film are Dorian Gray and Tom Sawyer, who is all grown up and a member of the American Secret Service. Due to the film character of the Invisible Man not being in the public domain, the screenwriters invented Rodney Skinner, who stole the invisibility formula and turned himself transparent in order to become a criminal mastermind.

Allan Quatermain (Connery) is recruited out of retirement in Africa, where he relocated after the death of his son, to lead the current generation of the League; Mina Harker (Peta Wilson), Dr. Henry Jekyll (Jason Flemyng), Captain Nemo (Naseeruddin Shah), Skinner (Tony Curran) and Gray (Stuart Townsend) are likewise recruited, while Sawyer (Shane West) joins voluntarily. The League believes themselves to be in a race against time to stop terrorists from destroying a peace conference, but the reality is a little different.

Jekyll and Hyde are a little different; Jekyll gets more screentime than Hyde, and he has to ingest a secret formula to release the monster. Oh, and Mina is now a widowed vampire instead of a divorced Badass Normal. Because of all such changes all tropes on adaptation will address to the comic book and the source novels.

The League of Extraordinary Tropes: