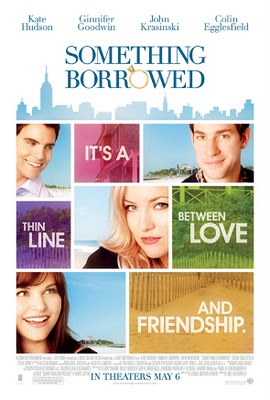 Something Borrowed is a 2011 Romantic Comedy film based on the 2005 novel of the same name by Emily Giffin. It stars Ginnifer Goodwin, Kate Hudson, Colin Egglesfield and John Krasinski. Produced by Hilary Swank's 2S Filmsnote  for Hilary Swank and Molly Smith.
Advertisement:

Rachel (Goodwin) has been friends with Darcy (Hudson) her entire life, despite their vast personality differences - Rachel is shy and bookish while Darcy is a vain and hard partying airhead. At Rachel's thirtieth birthday party she ends up spending the night with Darcy's fiancé Dex (Egglesfield) and begins to realise she's been in love with him for years. The problem is,of course, that he is set to marry her best friend.