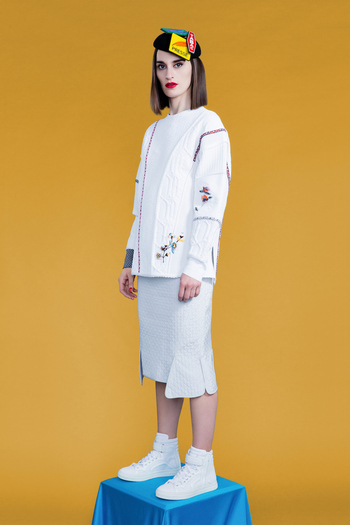 She wants to see you.note Photo by Alexandra Kingo

Yelle are a French electropop band formed in 2005 from singer Julie Budet and producer GrandMarnier (Jean-François Perrier). They are famous in their homeland and abroad for their energetic and Retraux sound, their fun and often ironic lyrics and their colourful stage performances.

They first became prominent when their song "Short Dick Cuizi" (an early version of their debut single "Je veux te voir") was published on MySpace. Joined by producer and keyboardist DJ Tepr (Tanguy Destable), they released their debut album Pop Up in 2007, and they quickly made the waves in France and abroad, being named "Artist of the Week" by MTV in March 2008. In 2011, after the release of their second album Safari Disco Club, they opened for Katy Perry in the UK Dates of her California Dreams Tour. Tepr officially left the group before their third album was released, but he still collaborates from time to time with production and remixes.

Yelle's sound, while primarily being electro- and dance-pop, draws inspiration from pretty much all late '80s - early '90s music genres and acts, spanning from Prince to Red Hot Chili Peppers and Cyndi Lauper. Despite their worldwide success, they have insisted in singing in French only, to be able to fully express themselves in a language they are familiar with.

Not to be confused with fellow electronic music act Yello.