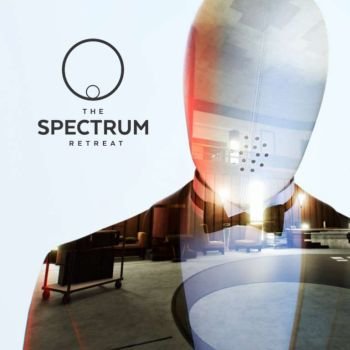 Ah! Good morning. I hope you had a restful sleep...
Advertisement:

It's 20 Minutes into the Future and you're the guest at the Penrose Hotel, a luxurious retreat for those wanting an escape from the everyday world. You've been here... a while. You don't know how long, really, but this didn't matter - until today. As you go through your daily routine, it quickly becomes apparent that something is wrong. Your phone glitches uncontrollably, urging you to act "normal". The front door doesn't open, the only other exit, the roof, is perpetually undergoing repairs, and you can't see anything out of the windows. Finally, a woman named Cooper contacts you and reveals the truth: you are a prisoner, held in the Penrose against your will.

If you want to escape, you have to find your way to the roof.

The Spectrum Retreat is a 2018 puzzle game by Ripstone Studios. The game alternates between exploring the hotel, attempting to find the clues about both it and your past, and puzzle sections as you attempt to solve various color-swapping-based puzzles to gain access to each subsequent floor of the Penrose on your way up.

As this is a plot-heavy game, expect spoilers.