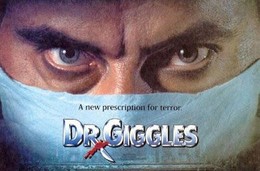 The Doctor is in...sane.
"This town has a doctor and his name is Rendell
Stay away from his house 'cause he's the doctor from Hell.
He killed all his patients, every last one,
And cut out their hearts, purely for fun.
So if you're from Moorehigh and you get sick
Fall on your knees and pray you die quick."
— A Playground Song by the children of Moorehigh
Advertisement:

Dr. Giggles is a Slasher Movie from 1992 directed by Manny Coto. It starred Larry Drake, Holly Marie Combs and Cliff De Young. It is notable among horror movie buffs for both its horror and comedy.

35 years ago in a town named Moorehigh, Dr. Rendell was found to have been ripping out the hearts of his patients with the help of his son Evan Jr. in an attempt to bring back his dead wife. Dr. Rendell was stoned to death by the townspeople, but his son disappeared. 35 years later, the now full-grown Evan Jr. murders two doctors, escapes the asylum that he was in and returns to Moorehigh as the insane Dr. Giggles, stalking victims to prep them for fatal examinations. But his quest to kill people with his medical abilities becomes his secondary concern once he learns about a certain girl's heart problem and decides to cure her in order to honor his father's interrupted work.

The film was produced by the movie arm of Dark Horse Comics, which released a 2-issue comic adaptation of the film that differs greatly from the final product, since it was based off of earlier drafts of the script. The main villain also appeared in the issues 64 to 66 of the same company's Dark Horse Presents comic.