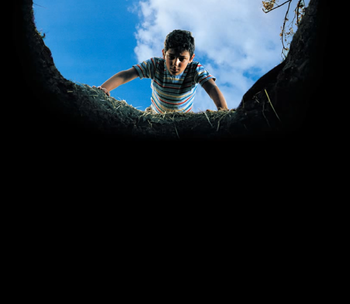 There's something alive down there...

Io non ho paura (I'm Not Scared) is an Italian film directed by Gabriele Salvatores, based on the novel by Niccolò Ammaniti. The story is set during Italy's anni di piombonote years of lead, a turbulent period marked by terrorism and kidnapping in the 1970s. One day in the peaceful rural village of Acqua Traverse, Michele Amitrano is out playing with his friends in the cornfields, when he discovers a hole in the ground near an abandoned house. When he investigates, he finds what appears to be a human foot. Although scared, Michele investigates further and finds a young boy confined in the hole, who is very much alive. Michele forms a bond with the mysterious boy, but quickly discovers that not all is well in Acqua Traverse, and Michele's own parents may have some connection to the boy in the hole.

I'm Not Scared contains examples of: