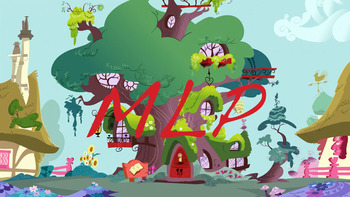 A festering heart of darkness lies beneath all this...
"Mortal Beings have more courage and goodness than you realize, Luna. Treat them with kindness and gentleness, and you will see it."
— Princess Celestia to Nightmare Moon

Hùndùn, formerly MLP is an ongoing humanized High Fantasy Adventure fanfic of My Little Pony: Friendship Is Magic by Morgan Ray Hess. It is a Darker and Edgier, Bloodier and Gorier, and Hotter and Sexier retelling of the original cartoon in which the author's stated goal is to bring the darker and more taboo implications of the original show to the forefront in order to demonstrate its hidden brilliance.

The basic premise of this fic is very similar to that of the original show: Princess Celestia dispatches her student Twilight Sparkle to the town of Avalon (this fic's equivalent of Ponyville) with an important mission. Twilight brings her apprentice Spike on her mission, and is aided by her five strange new friends in performing it. However, the key difference between Hùndùn and My Little Pony: Friendship Is Magic is that rather than being tasked with studying The Power of Friendship, Twilight and her friends are charged with preventing Discord, the God of Chaos, from escaping his prison in Tartarus and resuming his oppressive rule over the world as he did thousands of years ago.

The ongoing fic can be read here